Arfa’s “Freefall” is a thrilling EP that shows a remarkable command of space, displaying the rare skill of concision in electronic music. “Transit” kicks things off, a scratchy 2-step beat, thudding kick/sub combos, and woody hits do the bulk of the lifting, with reverb and delay-washed stereo work doing the rest.

“Pacing” is next up, and goes about doing just that—setting pace. Warm sub and bass tones are even more present in the second track, with droning synth strings and dreamy pads elevating the track to the ethereal, gently lilting to rest midway through before returning to its dizzy heights.

“Motions” sustains the vibe, carefully cranking up the intensity with warping basses that occasionally lean into speed garage sensibilities. Succinct ostinatos on the keys serve as the preferred punctuation throughout, and the whole track carries beautifully through the night—a prime cut for the after-hours listener.

The record ends ambitiously, with “Freefall”, which, rather fittingly, is the longest entry on the release. Switching up styles, but retaining much of the hazy atmosphere that characterizes the previous songs, Freefall skates on top of smooth jungle breaks and spacy vocal/synth work, peaking and dipping off to match the ebbs and flows of the rave”s many dancefloors.

Freefall is a smooth, immersive ride through UKG and jungle sonics, wonderfully showcasing the idea that less, is indeed more. 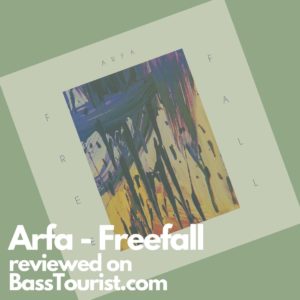