On their first collaborative EP, two of Livity Sounds most unique and distinctive signees of late create an enveloping and delicately crafted sonic world, laced with intricate rhythms and textures. All of which are delivered with a healthy dose of sub-bass, dancefloor sensibility, and an underlying sense of spiritual resonance.

By blending the influences of their own unique geographical and cultural settings (London’s urban sprawl and the arid Tunisian desert), Tiwaline and Wooton have crafted a club record that not only intertwines their respective sonic roots but also creates a world that is distinctly its own. And whilst certain familiar touchpoints can be identified throughout the record: such as the weighty four to the floor throb of “Nine Points” or the UK Garage influenced percussive swing of “Light Transmission”, these moments of orientation are often fleeting and lost in a haze of dubbed-out psychedelic pressure.

The lead single “Blue Dub” blends classic, smoky dub techno chords and atmospheres with a rolling, chest-rattling sub that propels the track into a rhythmic territory that is more akin to Pearson Sounds Hessle Audio classic “XLB” than Basic Channel. The ever-driving pulse is interspersed with echo-washed and characterful tribal drum hits and accompanied by mountains of atmospheric space and tension which drifts into the ether before reaching a subdued crescendo of silence and a drop that is sure to wake any dancefloor out of its dub induced hypnosis.

The closer “Last Scene” sees Tiwaline and Wooton step away from the club and focus on the beautifully written ambiance, which up until this point, could have been overshadowed by the incredibly compelling rhythmic work of this record. The three-and-a-half-minute beatless track acts almost as a reluctant and melancholic farewell from an enveloping world of traditional dub sounds and tribal Saharan percussive aesthetics, which once entered, feels impossible to leave. 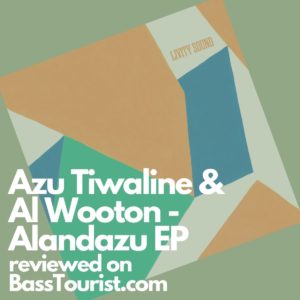