Burt Cope’s latest effort shows the hard-earned results of his ongoing sonic negotiation; from the new kid on the block in UK bass to the established presence he is today.

“Broken” is a potent amalgam of Cope’s sounds, situated somewhere between his unapologetically off-kilter entries, as shown in “E Numberz” and “Sword Fight”, and his large and in charge efforts, such as the recently released “Business” EP. The Oxford resident’s knack for tuneful build-ups is on full show, marinating the meat of the track before dropping harsh screeches and chromatic bass licks that play fetch and return over a commanding kick. It stands out as an entry that, whilst embedded in the EDM-influenced sounds of the day, still pays homage to those that came before it in the scene. The vocal is, by all accounts, very memorable, and is sure to be earworm in the quieter hours of the working week.

A host of impressive features complete the EP, with UKG standout Yemi teasing the gentler flavors out through the vocal line. The use of stereo lifts the added keys to the sublime, and bright strings accompany the emotive buildups before dropping into the comfort of a bouncy bassline and crisp NUKG drums.

If Yemi’s flip was working with the lighter elements, Deadbeat’s entry makes full use of the shadow. Sheffield’s busiest wizard of bass pulls no punches, reveling in the grottier sounds that he has, over time, shown a complete mastery of. Guttural, warping lows and 4×4 drums are wonderfully layered, and a commitment to the use of variation across the main motif does the track, and bass music more generally, a great service. Take notes aspiring bass producers.

Finally, Mr. Dubz’s release ramps up the BPM to drum and bass territory, suggesting jump-up flavors before confounding expectations, delving into droning, detuned bass, and chopped-up vocals. Cosmic arpeggios and dissonant synth breaks stitch the action together, making for a welcome uptempo addition amongst the remixes.

“Broken” is a neat addition to Burt Cope’s established catalog, with the featured remixes showcasing impressive work from standouts in UKG, bassline, and drum and bass. 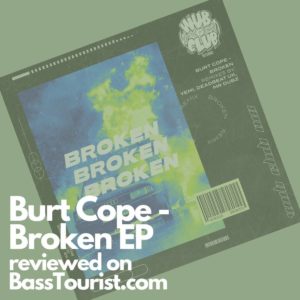