The good thing about instrumental dance music is often the title of the song doesn’t matter. See Autechre or Aphex Twin. The problem is then the name can sometimes influence how you interpret the music. So I want to ignore the name “Shattered Retina” because it’s a much more disturbing image than the track deserves.

“Shattered Retina”, the first track from this EP by Cocktail Party Effect, is a gorgeous industrial, or bass, or techno roller, depending on your context. Simple and driving, skittering bass as/and kick, with distortion, offsets sonar blips, and light drones. There’s just enough occasional percussion to add variation. Reminiscent of “I care because you do” Aphex, It’s dark and brooding but somehow warm and calming at the same time, like thunder rolling in.

“Triops” takes the industrial feel further, first with anxiety-inducing heart monitor blips and then with crunchy, schizophrenic drums that confuse the senses. The sounds are close and then far away. Stop time rhythms catch you off guard, before pummeling you relentlessly. It captures your attention and never lets go.

“When the Gun Claps” feels like a classic speed garage breakdown gone horribly wrong. Tension builds around a hard-as-hell vocal sample, but without release. Until it goes in! Halfway through the tune, gun fingers are in the air and heads are bobbing. If the whole EP were a single track, this would be the section you were waiting for. Hard percussion, texture and tone, and effect arrangement remind me of “Lion” by Vex’d, to this day, one of my favorite tracks ever.

This whole EP is certainly not for the faint of heart but is expertly crafted, and well worth the listen. 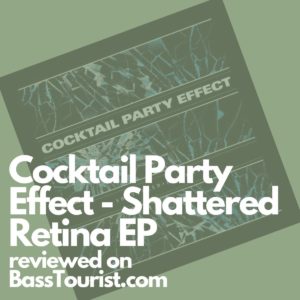