Cutcross Recordings put out the third instalment of their compilation series, the second one with a theme, and is appropriately titled “With the Pulse”. Dubstep sonics run rampant over the nearly twenty minutes of runtime and, in the label’s own words, is led by “distinctly percussive driven sounds”–an appropriate name, then, for this four-tracker.

Conzi leads the dance with “Kway”, a warping, weighty sub line stomps beneath chopped vocals and ticking hats before morphing into something altogether more groove centred. The pad break midway through provides a little breathing room before the vocal chops reestablish their presence, the main motif again wresting control until the closing bars.

Ehua follows up with ‘Venom’, whose rain shakers, cabasas, tribal drums and dissonant strings make for great Mise-en-scène. Haunting vocals, wobbling subs and tuned drums make up the bulk of the theme, with flutes and well-chosen synth work adding colour on the fringes. An excellent cut for those looking to bridge dub over into funky territory and beyond.

Zygos‘ “’11” is a testament to the track order of this release; its harrowing atmosphere fits perfectly in the running, with a fluttering sub-bass pattern, an arsenal of drums to adumbrate the track’s rhythms and a delayed one-shot reminiscent of a Commodo track. Occasionally, a detuning ostinato plays that sounds like one’s smartphone has run out of battery, and somehow matches the overall tone incredibly well viz. a hazy, paranoid sway through a dancefloor populated by ghouls, and one that is riveting from the first second to the last.

Finally, what feels like a reprieve, though admittedly only on account of how murky the preceding tracks have been, Jamiu‘s “Rasaks” has skippy, grime-like qualities, whilst still retaining many of the EP’s dubstep sensibilities. It feels like emerging from a dark tunnel to find a familiar-yet-unfamiliar world, populated by hazy memories of a forgotten childhood, past lovers and shores yet reached. A suitably trippy end for a veritable quest of an EP.

“With the Pulse” is of impressive quality and contains four, well-portioned dancefloor experiments. Expect an unravelling journey from start to finish. 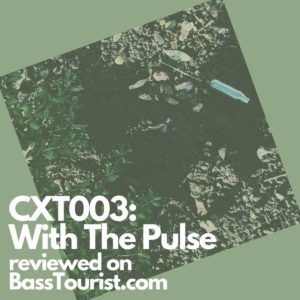