Following hot on the heels of September 2020’s “Higher” EP, a collaborative effort with noteworthy producer Medlar under the alias Nitework, Ell Murphy’s debut EP Freedom sees the South-East Londoner fast establishing herself as a UKG mainstay. Composed entirely during lockdown, the five-track release features collaborations with some of the hottest names in the scene and is an astonishing body of work that is a testament to Ell’s creative ability and vision.

Title track “Freedom” grows on you with every listen. A joint effort with Rotterdam resident and fellow South London Pressings affiliate DJ Crisps, the title track sees Ell Murphy in bloom – the virtuosic quality of her full-voiced vocal flourishes ooze with gospel sensibility. The hair-raising tune first emerged in 2019 as an acapella that soundtracked a turning point in her life: “I’d been through a difficult time…” she writes, “… so I wrote Freedom about finally looking into some sort of hope for my future.” Her lyrical content features the same glowing positivity as of her radiant 2020 tune Sunshine, only in this instance, her triumphant vocals emerge artfully counterposed against grainy breaks, hedonistic organ comps, and distorted, sweeping sub-bass set to rattle bass bins and car stereos nationwide and beyond. It is at once a nostalgic nod to rave-era euphoria, but also the timely lockdown easing anthem we want and deserve. “Hours” presents itself as a different beast altogether. Delivering a low-slung Sheffield sound, Japanese producer Stones Taro suspends heavily syncopated broken beats, ephemeral, whispered vocal ad-libs, and echoing mid-range synth pads over a bumpy, humming bassline, the melodic quality of which is equally as infectious as Murphy’s vocal hooks. It delivers a laidback atmosphere that would be well suited to an opening set, or simply nattering with friends over a beer in the park.

B-side opener “Letting Go” is as close to riding in dodgems as you can get without suffering a regrettable case of whiplash. The bouncy high-end synth lines are energetic and bags of fun, packaged in a neat 4 to the floor format that comes equipped with hissing hi-hats, ticking rim-hits, and compact segments of vocal samples. Murphy and Highrise have successfully ensured that this forward-facing iteration of speed garage is equally as mixable as it is enjoyable. Closing the album, Ell Murphy and Tuff Trax take you back to the funfair with “Close” which boasts an understated, bleeping bassline and groovy vocal riffs, and a smattering of swung-out synth-lines, excellent material to bump your head to as you sip a mojito in the pouring rain under a badly placed beer garden umbrella.

Sandwiched between the two, “Blue” takes another turn entirely. Picasso and Murphy lead you through a misty soundscape alive with birdsong that blossoms into spoken word, crackling with record static. Syncopated, jagged vocal thrusts and sparse drum-programming punctuate the track, juxtaposed with sustained, hazy synth lines to maintain a mellow and reflective quality despite the song’s melancholy themes, offering the perspective of an outsider looking coolly in. This one is sure to leave a good impression on your sonic palate, as well as cleansing it nicely between the two speed-garage heaters.

As well as supporting this release, be sure to check out Ell’s own recently launched label “Jucey Tunes”.

“Freedom” is available to buy and stream in full on Friday, 21st of May. 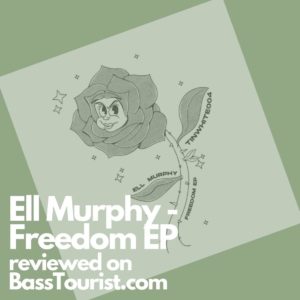