The Acid Pan EP by Fork and Knife comes together like the soundtrack for a post-apocalyptic video game, but one where you’re winning.

“Acid Pan”, the first, drips acid as you’d expect, but it’s the basslines that will get you. Somewhere post-2step garage, post-dubstep, post-UK funky, the beats are huge, steppy and the basslines twist and turn like aurora borealis.

The bass is the theme, I think. “Goblin Choir” centers around early grime-blips and a creepy choir sample, but again it’s the bass that makes you nearly crash the car. Way up front, you may be dancing but face contortions are inevitable.

“Tombstone” could be the B-side to “Goblin Choir” or vice versa. Along with its Tik&Borrow remix, the bass is captured and carefully controlled. The big difference is Tik&Borrow might’ve tranquilized it for a dubstep interpretation and rode it around like a T-rex. But who could blame them?

While a lot of EPs feel like a few good tracks put together, or one good track and filler, the Acid Pan EP feels like coherent variations on a dark, teeth-gnashing theme. The continuing future of bass music is terrifying, but well illustrated in these five tracks. 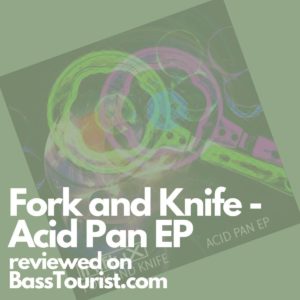