With classic bassline tunes, it’s often hard to place where you first heard them. This is especially true if you lived in a city where the genre has found consistent popularity. Bradford, for all its complex social realities, had a horse in the race when it came to this particular brand of uptempo garage and, though I was guilty of plentiful snobbery at the time, the joke ended up being on me—I’m obsessed with the stuff now.

“Gangster” by Mask is a prime example of an immediately recognizable bassline tune with murky origins. Sonically, the track opens with pizzicati string plucks which flit beneath the famous Ray Liotta opener in Goodfellas, (“As far back as I can remember I always wanted to be a gangster”), which is such a fitting representation of the on-the-nose qualities that noughties-era 4×4 tended to have that it’s almost comical. A running theme, especially within the subgenres of bassline that moved towards grime, lies in the genre’s glorification of hedonism, with the important caveat that it rarely loses sight of the socio-economic realities present in a largely working-class audience.

“Pop Champagne”, as one example, is a classic from the Sheffield scene with lyrical themes that clearly outline the above. In K Dot’s chorus, he explains that: “All the mandem pop champagne/all the gyaldem pop champagne” which is contrasted with a later nod to its financial implications: “But I won’t have champs if I ain’t got cash”. This is more than a glib observation, rather, it is an unambiguous representation of the material conditions that the music was born out of and an aspect that one must consider when approaching the bravado that this corner of bassline revels in.

Returning to the track and following quite a lengthy intro, Gangster drops into its exceptionally catchy main motif, which features a warping bassline and a slow reintroduction of the aforementioned string and vocal elements. Later variations in phrases include subtle additions like timpani thuds and synth counterpoints panned to stereo; the whole thing is a neat exercise in tasteful restraint which is often missing from many modern interpretations of the genre.

After adding it to my rotation, I began to speculate as to exactly who “Mask” was. The only tracks I could find online had a few thousand plays at most and there seemed to be limited artist information irrespective of the platform. It was only through looking at Discogs that I realized Mask was in fact two people and that the two people have in fact been very influential in bass music under the shared alias ‘Agent X’, a name that is sure to ring many more bells. With this falling into place, it made much more sense that “Gangster” would be a track that neatly represented much of the music I would overhear growing up—it was written by experienced artists who wrote across the bass music spectrum.

Despite not knowing where I had first heard it, I was happy to turn people on to the tune at the pre-drinks or studio sessions I’ve attended since. This was especially pertinent given that much of the music from this era has been lost in plain sight. In bassline’s formative years broadband internet wasn’t available or affordable for many; the CD/vinyl culture of the day also means that a song’s availability in the present day relies on a fellow enthusiast choosing to upload it for very little in return.

As both a stomper in an old-school style and as a window into a very particular cultural history, it’s a blessing that “Bassline Classics” has chosen to upload “Gangster” by Mask—to this day it remains a tune that I bloody rate. 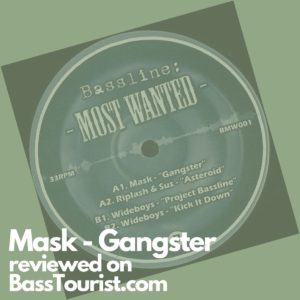