Mattik is an artist that has been on my radar for quite some time. I first became acquainted with his work through his early UK bass and bassline tracks, recognising our seemingly shared perspective on what makes UK bass music so appealing. Whilst many artists were veering towards the comfy centre-ground of EDM-influenced big room bass, Mattik consistently impressed with his dirty dynamism. Tracks like ‘Dead’ and ‘Melon Bag’ were sordid bits of sewage in an increasingly sanitised genre but, much as the times move on, so did he.

‘Kick Mad Flavour’ is an old-school track in new-school clothing. Much like the mullet with shaved sides or the resurgence of the moustache, UKG and its related sounds, including speed garage, have had a curious comeback. Now that we’ve had some time to acclimate it makes sense–who wouldn’t want a rhythmically interesting and reliably diverse set of sounds to be front and centre in underground music? Mattik’s latest definitely pays homage to this, capturing what many have failed to along the way: a good snare amidst all the other layers. The hats sound similar to the rattling of a chain-link fence and a groovy kick sits beneath a meaty bass that wobbles along one-legged to the colourful stereo work. Laser-like one-shots, dreamy keys and impish laughs decorate the spaces between phrases and the whole thing together feels as though it is best enjoyed as a fresh recasting of familiar themes.

UKG looks to be here for a while–try to enjoy it whilst it lasts. Cheers to that! 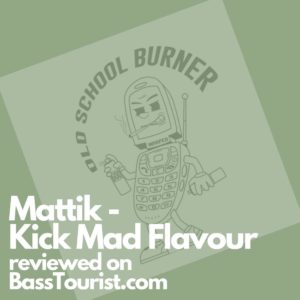