It’s not often you’ll hear me play a newly released drum n bass EP on repeat, but this here project is special. Even the name and artwork suggests this is no ordinary release. “Renegade Ravers” combines four of the scenes most talented up-and-coming producers into one beautifully packaged four tracker and personally I couldn’t have asked for much more. There’s a certain energy about this release that reeks of that pre-2007-smoking-allowed era of clubbing that us youngsters will never get to experience. I truly hope the sheere grottiness can inspire producers from all over to keep the darkside vibe alive!

The first track of the EP is from the prolific Fenland-based producer/DJ/MC Greedy G. In true “True Playaz” style, Greedy flips an iconic Eastcoast classic “Bring Da Ruckus” by the Wu Tang Clan. There’s real authenticity in the simplicity of the production which feels rather refreshing in a decade of overproduced DnB. The choice of samples is second to none and carries a strong B-Boy vibe from the get-go. The drum beats are absolutely rolling and stay pounding throughout and when that b-line drops you know what time it is! Pure bubbling bass, I absolutely love it. Wicked tune!

Although Guido YZ is no stranger to this darkside drum n bass business, you’re more likely to know him through his vast output of grime and garage which has cemented his position as one of the most exciting prospects in the scene. The piece put together here is titled “Real Murda”. Starting off with luscious pads reminiscent of the jungle era, the mood quickly darkens as a filtered teaser of the forthcoming bassline rolls in and the distorted breaks come crashing down. When the full weight of that bassline hits – it’s different – the levels of bounciness are off the charts! From then on it’s nothing but carnage in the form of a relentless onslaught of variations in the b’line which make up for a very solid belter. I can imagine this track to be great fun to mix and blend with so DJs make sure you check it out!

“Protocol” by Bugsy is probably my favorite track of the project… it’s just so filthy. I’m going to delve straight into it: that nutty b-line is a perfect homage to the simplicity of sound design in the early years of the new millennium. Adding to an industrial vibe, we have ever-evolving eerie pads sweeping into great effect from the beginning until the drop. For the cherry on top, Bugsy has gifted us with some of the most slamming drums I’ve heard in a while, class. This one hell of a rollin’ riddim is a real effective reflection of Bugsy’s recent production style: no holding back dancefloor damage. I urge you to check out all of this guy’s tunes!

The final track is by an underground producer called Apache. I know this fella has a real love for techy and frantic breakbeats but he also likes to dabble in the wonderful sounds of old skool jump up. “TNT” feels like an Original Sin track straight out of 2007 and definitely sets itself apart from the rest of the tracks on the project. The intro begins with just a drum kick pattern and shakers drenched in delay paired with terrifyingly dark-sounding synths, it’s when the full drum beat rolls in that you really get a taste of that classic jump-up sound so heavily influencing that of today. The b-line on this bad boy is more on the midrange side of things and is sure to be getting any crowd skanking up and down the country.

This four-track EP was kindly put together for free courtesy of Militant Music. Go and support the label and artists through their links below! 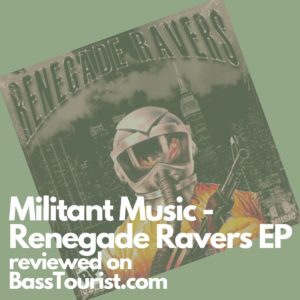