Nikki Nair is an anomaly in bass music.

From his array of sounds, knack for arrangements, right the way down to his city of origin (Knoxville, Tennessee), the leftfield producer has an uncompromisingly unique sonic imprint; something of great value in an increasingly homogenized bass music scene.

In just a short time I’ve had the pleasure of being introduced to Nair’s unique blend of glitchy wonk; which traverses acid, electro, garage, and UK bass influences, amongst others. This Week’s Track I Rate, “step 2”, is as though each of the above influences were thrown in a blender along with a malfunctioning stylophone–bewilderingly, I can’t get enough.

Taking off immediately with a neurotic, acid-electro style bass, the groove sees it shadowed note-for-note by a tight kick, alongside what could be best described as a distorted clave with clear reverb. The musical result of this pairing, underscored by its skittish hat patterns and a one-two punch of kick drum/snare, is of controlled chaos; chaos that, right as it builds to a climax, readily creeps into a swung halftime section. This shift is equal measures groovy and gross; a combination that proves very hard to not awkwardly try and bob your head along to. The track’s pyroclastic flow directs us back towards the original theme, enjoying several subtle variations on the way, all the while gleefully rolling in the filth it sounds like it emerged from.

What would happen if a producer from Tennessee, now living in Atlanta, was tasked with composing an acid-electro-IDM-bass music hybrid and was only given a malfunctioning stylophone and drum machine to do it, you ask? Why, that might sound something like “step 2” and I’m all the better for hearing it. 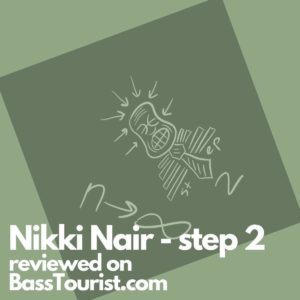