It’s no secret that I retain a healthy amount of skepticism for the big room and EDM sounds that have come to influence modern bass music. As the genre has grown, a wider range of mainstream influences have fused themselves onto the production styles of artists emerging around the globe; most often, this leads to the creep of sonic homogeneity, which has the capacity to dilute entire genres if left unchecked (see the trajectory of dubstep into and out of the mainstream as but one example).

NLMT has, in many ways, managed to consistently fold these potentially untoward influences into something special, performing the delicate balancing act of remaining open to new influences whilst staying true to his roots. “Mercy” is a sort of paraphrased manifesto for these musical ambitions, and accomplishes just that with surprising ease.

The record kicks off with the eponymous track, “Mercy”, and wastes no time showcasing NLMT’s diverse set of skills. Euphoric vocals lead the way, which have long become a signature of the Bradford native’s style, and are quickly intersected by industrial cymbal clangs, eventually making way for an impressively dense (and dissonant) bassline. The track’s bridge affords it some breathing room, and an obscure male vocal neatly segues the entry back towards its heavier highlights.

“Pleading” is up next, making clever use of pitched-up, drill-style 808s, which rightly signal the impending locomotion. As per the last track dreamy, effects-laden vocals run up until a potent drop; a hallmark which befits the newer school sensibilities of featured-collaborator “Cooky”.

“Break It Down” marks another collaboration, this time with a new start “Fraud”, and makes similar use of the aforementioned pitched 808s before breaking into a slurred, distorted tech-house/bass house style vocal. Numerous chops and airy synth lines coalesce and lead into a tight, melodic groove, with a number of subtle variations to keep the concepts fresh.

“Mercy” stands out as a coherent and exciting new bass release that showcases the most celebrated aspects of NLMT’s musical proclivities. Completed by the pair of collabs with surging up-and-comers, the Bradford producer might have found the formula to making new school bass music enjoyable for all comers. 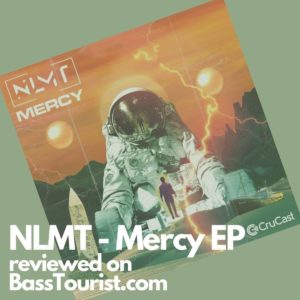