“Penumbra” is a bright spotlight on some of dance music’s brightest up-and-comers, with a welcome range of styles on offer throughout.

The record kicks off with Nativ of “Shifty” fame, a track that found its way into plenty of sets via its bassy minimalism at a time when UK Funky was a tighter knit club. ‘Brittle’ shows a maturation in Nativ’s sound, seeing him branch further into techy and bassy influences. The engine of the track, as it were, is a close pairing of a tight, “clatter and shuffle” rhythm section, with a sharp, grating bass riff. “Brittle” could be characterised by its menacing feel that would be right at home on the ‘scary downstairs floor’ of an edgy techno club. On the flip, Shawn Cartier adds to his proven track record for experimentation, dialling up the intensity by transforming a menacing listen into a near-psychotic one. Fierce, uptempo electro and techno stylings run amok—a combo that is sure to raise the mood of any dance music fans at the harder end.

Next up is Borai, a surging presence in contemporary British rave. Throughout the past few years, Borai has been working his way to the forefront of the scene following the release of the anthemic “Make Me” with Denham Audio. “I Can’t Stop” is no-nonsense action from start to finish, enjoying a bawdy bassline and a driven rhythm section tinged with electro and breaks stylings. The progressive synth work throughout is now a recognisable staple of Borai’s work and the various counterpoints that play off each other work wonders for the flavour of the piece. The acidic arpeggios in particular really help the track stay fresh in the mind, lending it that sought after “warehouse” quality that Borai seems to be so talented at touching upon. Farsight’s remix teases out the grime and funky flavours that I couldn’t which, to Farsight’s credit, seems organic with the sounds on offer.

This is followed by Luxe’s “On the Up (NRG Mix)”. I recently became familiar with Luxe after hearing “Belonging”, an emotive belter of a cut that does its best work when teasing the listener until its big payoff. Thankfully this formula isn’t dispensed with here and, after several minutes of snaking its path through noodly electronic territory, “On the Up” climaxes triumphantly at around the halfway point. The result is a piece that could be situated towards the bassier end of Anjunadeep’s catalogue —a label whose releases underscored much of my earlier raving. Nostalgic pads and a breathy choir synth reminiscent of an early 00s PS2 game afford some levity to the pounding kick, leaving a surprisingly euphoric aftertaste beyond the runtime. In earnest, I wasn’t familiar with Young Lychee’s work going into the remix but I’ll be sure to keep an ear to the ground now—the delicate balance of staying true to the original track’s general vibe whilst adding eclectic flourishes is well-performed and the end result is an entry that deftly balances the rough and the smooth with real dynamism and flair.

With a little something for everyone “Penumbra” is a tasting menu of electronic music and its novel sonic explorations paint an optimistic picture of what is to emerge from the underground. 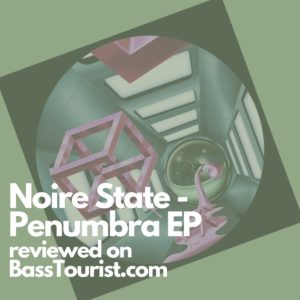