“Soulo” is an ambitious EP that mostly finds the mark and, though Otik’s execution is sometimes just “good”, it is more often great, and it is his commitment to a philosophy of experimentation and sonic exploration that warrants repeat listens, as well as plaudits for the moments in which it really shines.

I recently became acquainted with Otik’s music via the oft-criticised Spotify algorithm and, like several others I’m sure, I was quickly transfixed. His remix of Louf’s “Formation” demonstrates a clear talent for the reinterpretation/reimagining of themes, as well as considerable production chops to boot. The provided bio for “Soulo’ describes the project as “mood excursions” and it’s through this lens, together with its notable release on Martyn’s “3024” label, that signals the EPs direction, as well as offering a guide for how it might be best interpreted and enjoyed.

The record opens with “Lightyear Dub”, a track whose hallmarks include swirling, aquatic synths, a wonderfully warm bass tone and pace-setting clave clicks. The track is an excellent example of musical layers working together to create a satisfying soundscape, and out of this, the listener is able to imagine their own themes or narratives as they see fit. It’s perhaps remiss of me to not mention the “cosmic” sounds that the track leans into, but I really think that the deep sea, or vast expanses of water, are just as appropriate visual metaphors here. The piece is odyssey-like in its twists and turns and is profoundly enjoyable all the way through.

“Soulo” is next up and presents as a more meandering effort. Twinkling, ravey arpeggios do lend themselves somewhat to the imagining of a “post-covid” world (as the attached bio describes) and the emotive vocals peppered throughout are a nice touch, but it does feel as though the track lacks charge overall. Whether this is due to the more restrained use of drums, or the commitment to centring the track on atmospheric synth work is difficult to discern, but by not embracing either close enough, it’s difficult to feel like a particular mood or vision of the future, was properly explored as intended. Viewing the eponymous track as an inversion of traditional dance music themes might yield a more favourable opinion of what’s on offer, and I can certainly imagine listening to it differently off the dancefloor than I would on it. It does feel, however, as though the next track performs this “inversion” trick better.

“Paradise Mode” is a definite highlight of the record, blending tight, crisp jungle drums with a bouncy bassline and detuned arp. It is clear that bass music is familiar ground for Otik as spacey pads shore up the stereo, all the while a booming kick jousts through the mix with just the right intensity. The track is pleasantly progressive, carefully balancing each of the jungle flavours with veteran measure. This is where Otik’s sound and talents come into their own–a vision of dance music, grand in scope, with the talent to realise it with his arrangements and production talents.

“Garuna” is the most experimental track on Soulo by far and demonstrates the furthest reach of the “mood exploration” philosophy detailed earlier. The track has a double-time feel and clocks in at around 199bpm; this alone stands as reason enough to prick one’s ears up and thanks to the reggaeton, footwork and progressive electronic flavours, the piece makes for some novel listening. It’s frantic and hurried in tone, but this by no means hindered my enjoyment of it–a strange compound of sounds from a not-too-distant future.

Otik’s latest EP is a tasteful blend of moods and energy that, on the whole, defies categorisation for all the right reasons. It’s cerebral, carefully thought out music, and I anticipate that Otik will continue to push the envelope as his signature sound develops and refines. If a recent release on Martyn’s “3024” label is anything to go by, the future looks to have even greater things in store for the Bristolian. 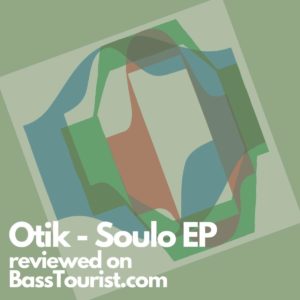