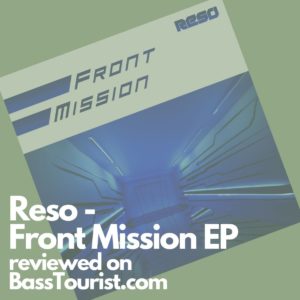 “Front Missio”, by Reso, is a versicolour blend of UK underground bass music sounds that deftly flirts with classic dubstep, grime and progressive themes whilst proudly wearing its industrial influences on its sleeve.

The EP starts with “Iridium” — an explosive affair with tightly coiled build-ups, further complemented by the array of drum sounds on offer. Distorted 808 kicks and grating surges in the midranges set an appropriate tone for the entire record and the rolling hats push the track into a double-time feel. The second section is a riotous play-around with dubstep themes, owed predominantly to a tight interlocking of the sub, bass and drums and is a worthy main motif for an exciting introduction. Chirping trills pan across stereo throughout and, after an ambient bridging section, the track crescendos with each element struggling for dominance in an impressive display of mix-balancing.

“Destroy Mode” is up next and, as the saying goes, if Iridium was dubstep’s feather, Destroy Mode is the whole chicken. A bawdy, up-front dubstep banger, Destroy Mode revels in its decidedly old-school flavours, sounding like a novel interpretation of its clear Deep Medi influences. Dissonance reminiscent of the greasier end of bassline (we’re looking at you, West Midlands) layered on top of incisive sub/kick combos does much of the heavy lifting, helped along by a thoughtful garnishing of swung ride cymbals–all too classic.

“Calcutec”, in both name and timbre, is a dip into the aforementioned industrial leanings of the EP. Marrying sinister soundscapes with grime-like kick patterns, skittish pops and atmospheric one-shots stitch together the dissonant madness and there are smudges of a personal favourite artist, Commodo, in the choice of stereo colouring. Whether an existing genre descriptor or not, I couldn’t help but note that this track, in particular, highlighted the ‘space bass’ feel of the entire release–sonic territory that Reso explores with great taste.

Finally, “Cerberus” is aptly named and serves as a fitting conclusion to an enlivening EP. Like its mythological namesake, the track’s many distorted barks and snarls are its hallmarks and prove brilliantly invasive as they sprint off the centre line in aggressive bursts. The variations throughout feel organic, progressing as the track sinks deeper into its own madness. One of my favourite moments of the record is its final section, which descends into a guttural, war-like halftime groove that satisfies something deep in the brain.

The merits of Front Mission lie in its dark, rich textures which, like any good bar of dark chocolate, are made more enjoyable by the presence of a manageable bitterness. Here Reso blends a number of bass music influences, welding them together with consistent industrial themes; the sum total is a release experimental enough to feel fresh, without sacrificing suitability for the dancefloor–an umbral effort suited for out-of-hours listening.