With a wide array of producer’s tricks at his disposal, Romania’s Shinbu unleashes a barrage of callous, industrial sounds that range from the head-bobbing to the harrowing on his latest EP “Nightmarchers”.

The record opens up with “Khungu”, an entry introduced by distorted strings, shrill stereo flickers, and percussive clicks. After a foreboding kick is dropped, metallic clangs and warping basses trade licks as the sinister strings are reintroduced–superbly sinister. After an ambient pause around the halfway mark, the drums return with a vengeance along with snare-like pops that are soaked in reverb, eventually winding down to make way for the following track.

“Rogue Wave” does little to slow what is, by this point, a gathering pace. After 45 seconds of eerie pad lines and spooky stereo, an even more thunderous kick asserts itself in the mix. Soon to follow is a run of hats that fire off like a pneumatic drill, which become a staple of the track, stitching together each unsettling phrase. Eastern pipes sit atop the industrial aggression wonderfully, transmuting the feel from something overwhelming to something almost inspiring.

The titular track, “Nightmarchers”, begins with a found footage-esque section of noise, garnished with occasional percussive elements. At around 45 seconds a marching drumline pushes the pace, with Shinbu’s now-familiar hallmarks of flickering stereo work speckled throughout. Horn-like ambiance swells in on occasion, similar in tone to a call to war–I certainly felt like I had to oblige.

“Enso” is the penultimate track on the EP and is carried through by its crisp hats. The metallic sounds are the standouts here, with cymbals and shuffling pangs sitting right up front in the mix. This admixture is, of course, incomplete without an indulgent kick and it is no different here. Shinbu seems to have cracked a formula on this track and this EP more generally and the result is most enjoyable. A particular highlight on “Enso” is the pots-and-pans groove that kicks in at the three minutes fifty mark, showing the producer’s unique knack for rhythm in a genre that demands it to be done well.

Finally, the appropriately titled “End” closes the show and feels very much akin to “Nightmarchers”. Whether this is a deliberate thematic choice or not (and I suspect it is) lends Shinbu more or less credit depending, but it remains a potent track in and of its own right. The variations in the latter half of the track showcase the artist’s talent for the careful balance of new, but thematically consistent changes within and across a body of work, and the piercing rolls are a facet well-chosen to lift the composition above what would be the weakest entry of the bunch.

Shinbu’s “Nightmarchers” is a riveting, pitch-black listen with a superbly chosen arrangement of percussive work. Demolishing kicks and nightmarish ambience feature in equal measure and the whole record is better for its frequent dips into eastern, warlike themes–one to be uncomfortably enjoyed at the back of a dingy basement rave or an industrial warehouse. 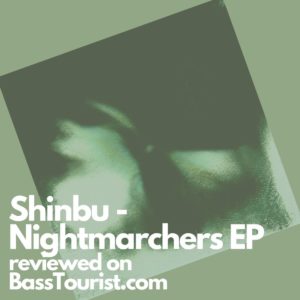