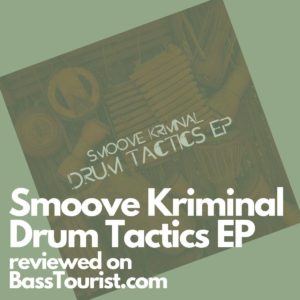 Smoove Kriminal lives up to his name. I’m really excited for this EP.

“Avalanche” is everything good about 90s Caribbean music, sped up. Choppy drum samples compete with staccato vocal quips, whistles and every other drum sound in the drum patch. The arrangement is perfect, and it’s nothing short of a thousand drum machines rolling downhill, about to bury your chalet. Pick any drum pattern and I challenge you not to bop along.

“Come Through” is way more sneaky. If we’re sticking with a 90s motif, I’m reminded of the rawness of early tribal house and later dark garage or whatever we’re calling pre-dubstep. It’s dark, bumpy, and routes out a groove with precision.

And finally “Depth” is the club banger. More up front, the riddim is less challenging, more vodka. This sits nicely next Roska’s clubbier joints and might be heard in a Detroit warehouse right around the time the sun was coming up. Probably on Monday, after raving since Friday.