As a former resident of the city the following statement might be seen as coming from a notably biased position, but: I have long considered Nottingham’s underground music scene to punch well above its weight.

Boasting a vibrant and diverse cast of characters, Nottingham plays host to a wealth of standouts in grime, bass music, and beyond. Indeed, the wider East Midlands has been a breeding ground for artistic talent and has seen many of its acts ascend to international stardom. Scene staples such as Darkzy, Bru-C, Window Kid, and Mez are but a few of the names that warrant immediate recognition in bass music alone.

In a scene of such bold personalities, it should almost certainly be considered an achievement to stand out—a feat that 25-year-old Snowy performs with relative ease.

Alongside an impressively large back catalog, Snowy demonstrates his clear knack for spitting on tracks like “Reddit”—an aggressive banger replete with murky production spat at a relentless pace right through to the final bar. The link-up with Filthy Gears is a credit to the good taste of both artists and is representative of a central theme in Snowy’s work: an eye for boundary-pushing collabs within and sometimes beyond the broad scope of grime music. In the same year, Snowy collaborated with Jason Williamson of the Sleaford Mods on ‘Effed’ which, beyond an initial eyebrow raise, is a combination that makes further sense on repeat listens.

‘Lovey Dovey’ is, in many ways, a statement of intent highlighting Snowy’s commitment to expanding his growing repertoire. It’s an entry that further adds to his array of flow-bending, genre-melding niceness. Add to that the ethereal production of Frost, a criminally underrated artist in his own right, and the end result is a bouncy riddim that balances shades of vintage Murlo with rhythm and grime flavors that make the track hard to plot on the broader spectrum of electronic music.

Snowy’s variation on the ‘romance in the ends’ theme that runs through classic grime is complemented by his clever wordplay, tasteful phonetic chains, and internal rhyme schemes.  His signature flow is further embellished by a proudly presented Notts accent which makes for an altogether notable release in the midst of what can often feel like a saturated scene.

At just over two minutes, I had aimed for this review to be as much of a spotlight on Snowy as I had his most recent track. I would hope that, above all else, this brings more eyes and ears to the East Midlands and the exceptionally talented artists that call it home. 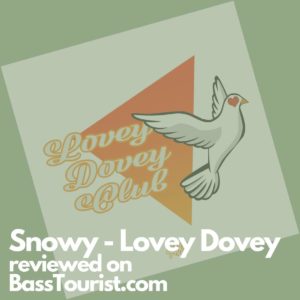