This isn’t intended to be a brag, however contrary my intentions may seem. Rather, it is to highlight two important things: firstly, he’s very sound and secondly, his beats are too. The Derby, UK native is still so young; despite this, he consistently proves that he has a veteran’s ear for uptempo bass music.

Following the breakout success of his “Intent 2 Supply” mix which exclusively featured his own productions (a collection of tunes still in my personal gym rotation), Bailey has kept himself rather busy, carefully releasing tracks from selected labels to coincide with the wind-down of Covid-19 restrictions.

“Right Now” is, unsurprisingly, another entry that Supply can boast as part of his extensive repertoire. Rattling hats outline the pacy tempo whilst a warping, distorted bass riff barges its way right to the front, driven forward by the barked shouts of the gassed-up MC. The track doesn’t attempt to reinvent the wheel with its ebb-and-flow format but this does not detract from it in any respects–Supply’s repeated fresh takes on jungle/drum and bass do more than enough of the heavy lifting in this regard. The final variation closes out the show in emphatic fashion and cements “Right Now” as a cut that will likely be finding its way into many a DJ crate.

What luck as a season of Summer raving draws nearer! 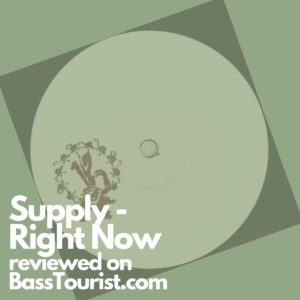