I made the choice this week that I wanted to take on a review from a recent Cheeky Music Group release, but holy smokes how many recent releases do they have? I’d love to have a taste of whatever they put in the coffee at Cheeky Music HQ… I counted 5 top-quality releases in March alone(!) from the Lobster Theremin sublabel.

BRKN020, from their sub-label Breaks ‘n’ Pieces, sees Xander serve up a 4-course meal of dark 2-step grooves, with an accompanying side-dish from Danish producer Main Phase. Xander, himself a label owner with Over and Out, is better known for his more bubbly speed garage tracks on his own label, and from Breaksy and UK Funky cameos popping up elsewhere. “Restless EP”, however, sees the producer explore more unfamiliar territory with skipping drums, and atmospheric sound designs aplenty.

Darkness is the name of the game in this EP. With “Restless”, the Brighton-based producer kicks us exactly as he means to go on. The EP’s title track’s percussion loops may sound like Xander went a bit wild with a UK Garage sample pack, but all that gets forgotten when the rolling Reese bass comes to town and locks the listener into the relentless groove. Suddenly the cliché incidental dub sirens and filtered stabs seem to make so much more sense, and the skippy beats turn into an excellently crafted groove over the droning bassline. Towards the end of the track the bass is replaced with minor pads to create a powerful sense of dread; again the drums looping to keep the listener locked in and shaking a leg.

The theme seamlessly continues into “Break-A-Dawn”, but in this track, the maxims of the classic 2-step drum loop are dropped in favor of what a Masterchef judge might want to call a ‘deconstructed 2-step’. Again, the relationships introduced in track 1 of the EP, where downcast pads and sustained Reeses interact with persistent drum grooves, take up the primary role of the track. The drums here are heavily saturated and colored in a way to place you in a sweaty basement club whether you’re listening at home, walking the dog, or at… well… a sweaty basement club.

“Untitled (After Hours Mix)” comes next and, as “Break-A-Dawn” builds from “Restless”, “Untitled (After Hours Mix)” builds from “Break-A-Dawn”. The deconstructed 2 steps get cut and tripped out more. The pads and FX, before dark, become now terrifying. The sustained Reeses are replaced by warps so deep they could be sharing philosophy quotes on their Instagram stories. This portion of Xander’s meal goes down heavily and isn’t one to be enjoyed everywhere. This track is made especially for the dancefloor, with classic dubstep flavors making their way onto the dish.

“Don’t Stop Won’t Stop” is a much-needed pick-me-up after the increasing foreboding of the first three tracks massaged the dark thoughts in my head. Still dark, to a point, but more of a return back to the vibes of “Restless” than the all-out rage of the previous track. We still have all the elements there, with wobbly basses and diminished chords, but the overall message is much more ‘get up and dance’. “Don’t Stop Won’t Stop” is clearly influenced by the lo-fi movement, with hefty doses of tape saturation on the drums and liberally applied vinyl crackle. I think this is where it gets its feeling. This track takes itself less seriously than those preceding it, and that feeling passes on to the dancers. The warps are energetic and active where before they were hateful, and the top end of the drums is a masterclass in how to use grace notes to inject groove.

The EP is rounded off by Main Phase’s remix of the penultimate track. The energy of this one from the Dane drops the scene set by Xander and goes all out balls-to-the-wall feelgood speed garage. The tempo gets cranked up and the skipping drums go out of the window in place of a straight-up 4×4 rhythm and a pounding bassline. Grab your friend and tell them you love them because Main Phase’s remix rounds off the emotional rollercoaster ride with a feeling that makes you want to start it all over again. 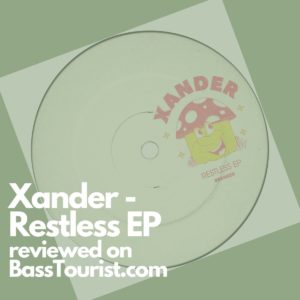