The rickety sounds of ‘Calibration’ kick off proceedings and there is little time wasted in establishing the eerie sonics that characterizes the intro. Plasmatic swells and theremin-like synths feed off one another, driving the ghost train deeper underground until the listener is engulfed in gloom.

From there “Freak” ups the ante and is a wicked testament to the slew of inspired, hybrid bass sounds that have recently emerged from the 140 community. Initially approaching with a UKG-style organ, Yoofee soon switches it up with rolling hats, percussive scrapes, and a commanding sub. Together, this forms a tight, menacing groove with a rolling feel–a heater that would sit pretty alongside a host of other underground bass music sounds.

“Ok Cold” leads with clear grime influences, never taking its eyes too far off the classic, Bristol-style dub sounds that have paved the way for many thereafter. A syncopated bassline powers on ahead, leaving detuned, bottle-like leads, purring stereo textures, and mysterious vocal chops to scurry around after it. The track feels rhythmically pushed, but it’s precisely in the subtle overtones of urgency (and the discomfort that results) that the track does its best work.

The record concludes with “Negative Released” (ft. Orlando) and is introduced by sounds akin to radar pings escalating in urgency all whilst a foreboding bass intermittently blares beneath. This passage cleverly segues into a twisted trap/dub medley, which only becomes more crooked and warped as it draws closer to its conclusion. Squawking, crow-like stereo textures further exacerbate the discomfort, and I couldn’t decide whether to nod my head in approval or shake it in disgust.

Yoofee’s “Freak” is deliciously dingy and downright danceable. Now, If you’ll excuse my alliterative gushing, I’ve got some bass music to listen to. 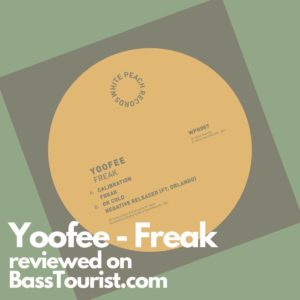